Driving into Calgary today, I had to take this picture: 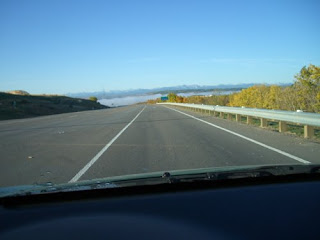 That’s not a lake down there. It’s a fog-shrouded town!

Preamble to my day:

1) Yes, I was a history major and am still a history buff.
2) The days have been way too lovely and sunny to spend them cooped up in museums!

So, today, I went to Heritage Park, which is Calgary’s Fort Edmonton. It’s quite a similar set up, only I got to see Heritage Park while it was fully running. It was a much more hectic, but richer, experience.

Entrance to Heritage Park is 15$ and then you pay 3$ per ride you want to take or 10$ for unlimited rides. Rides include a steam train, a paddle boat, a wagon, a trolley, and a variety of midway attractions. I suspected that the 10$ option would be the best value, so I went with that.

Guests who arrive before 10AM are served a complimentary and surprisingly hearty and delicious pancake and sausage breakfast with juice. So, I started with that and then began my tour of the park.

My first stop was the blacksmith shop where I stayed for almost a half hour watching the blacksmith turn a piece of iron into a meat fork. He gave me a lot of information on the trade and how one learns it.

After that, I wandered through the village, taking pictures of random things that caught my eye. 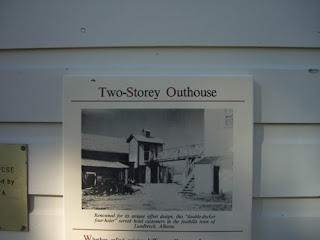 This outhouse was attached to a bar with a hotel over it. Bar patrons used the ground floor holes while the hotel guests used the upstairs ones. 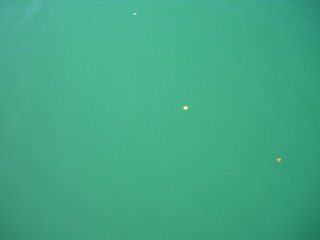 The ride on the SS Moyie was an incredible value, affording me a half hour cruise of the Calgary reservoir.

Rugs I Wouldn’t Have in My Home: 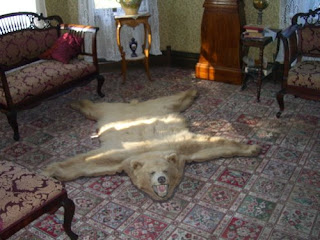 I was startled just walking into that parlour. Imagine wandering around the house in the wee hours of the morning while half asleep and stumbling onto that thing?! 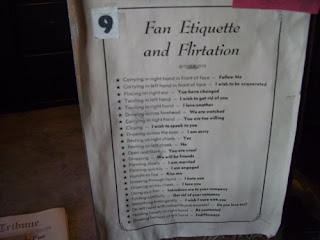 That Oh-So-Gaudy Victorian Sense of Style: 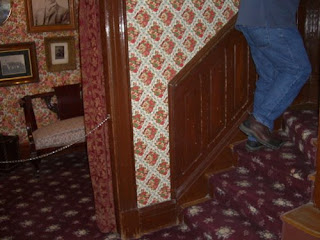 I wish I hadn’t been shy and had taken a picture of the interpreter in this house. My first thought was that her blouse matched the wallpaper, but I didn’t say that out loud. When I commented on the decor, she said “A lot of people are impressed that my blouse matches the wallpaper.” LOL 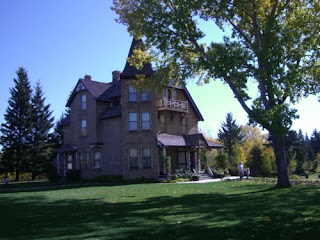 Some people, including the interpreter, call this a Queen Anne Cottage. It’s actually a rare type of Victorian that followed the Queen Anne Cottage, which has more ornamentation, and is a Gothic Victorian. If money were no object and I could afford someone to ensure the upkeep of such a home, this is what I would have built for myself. I love the square tower and the general layout of the rooms inside without there being all the Queen Anne ‘frou frou.’

Before having lunch, I decided to try the midway. I rode the whip, which was fun, but very tame. I then decided for some unfathomable reason to ride the ferris wheel. The second to last time I rode a ferris wheel, I told myself ‘never again’ and six years later I found myself riding it again and being stuck at the top for an unfathomably long time due to a mechanical problem (how reassuring). But this wheel seemed tiny! Yeah. Let’s just say I didn’t have much fun and I was really, really, really glad when the ride was over. This video makes me queasy all over again:

I walked around for a bit after to settle my stomach and decide what I was going to do for food. I carry snacks, but was getting a bit tired of my usual lunch of a granola bar, cheese, nuts, and fruit. I avoid having lunch in these sorts of places, but when I saw the prices at the most ‘upscale’ restaurant on site, I decided to treat myself to a nice meal. Prices would have been considered reasonable anywhere and were a bargain in this sort of location. 14$ (including tip) netted me a huge gourmet sandwich of provolone, turkey, and vegetables, with a side of fresh french fries and a bottomless glass of apple juice.

Add a steam train ride, tons of walking, and an extremely bright sun, and I was wiped by about 4. What a full day!

I really liked Heritage Park and suspect that even if Fort Edmonton Park had been running full swing it wouldn’t have been quite as much fun. My only major complaint about Heritage Park is that too many of the exhibits are actually stores. For example, you walk into a period drug store and are accosted to buy all manner of goods before you can walk to the back and see the actual museum exhibits. Otherwise, HP offers really good value for the money.