I’ve edited my post about the drive to Kansas because my bad luck has had absolutely nothing to do with the fine folks at Cramer Tire in Midwest City, OK.

L suggested that I go get the flat tire looked at today so that it could sit overnight and we could monitor the pressure, plus it would cut down on the Wednesday stress. Great idea!

He fortified me with a blueberry pancake and bacon breakfast and then we slooooowly motored over to Wiechman-Bush Tire.

A tech came right out to look at my tire and would you believe my dumb luck: there was a HUGE hole in the sidewall! He says that the only explanation for that is that I hit something on the way here. He believes that the tire was good and that Cramer did right by me. It was just one of those bad days on the road. He promised to replace the tire with another used one, move the outside tire (the worst of my six) to the inside, and mount the ‘new’ tire on the outside, and that my rig would be ready in a couple of hours.

L and I went off so he could show me a good place to get gas. We then stopped at the U-Haul place where he gets his propane tanks filled to find out if they fill motorhomes (yes).

Next, he suggested we stop in his favourite thrift store, which was great since I was able to score some badly needed sporty summer skirts for just a couple of bucks a piece.

There, I made the most hilarious thrift store find of my life: 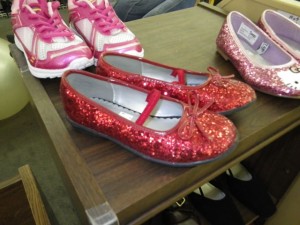 I am in Kansas and that is a pair of ruby slippers!

Back at L’s house, he took out his computer to show me a free state campground on the way north. I have five days to kill before I meet PJ and her hubby near Omaha, so the idea is to stop at that campground for a few days before pushing on to Stromsburg and its city park.

We’d just finished do that when my phone rang with news that the rig was ready. L dropped me off there and had a look at the tire. He is very happy with the one that was put on. He headed out to an appointment and I went in to pay the massive $39 bill. No, that is not a typo. That sound you hear is relief. 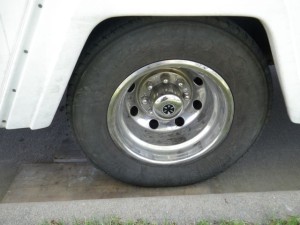 I then got gas and headed back to U-Haul on Seneca. I hadn’t noticed that the entrance was quite steep and I scraped the bottom of my tow bar getting in. The exit was even worse, so I ended up backing across the lot to go back out the way I came in, but at as much of an angle as possible. I still heard some scraping, but not as bad as when I came in.

Now, I’m back in front of the house. My birthday boy got roadsick, so I’m glad that I procrastinated on cleaning the bedding since I would have had to redo the job. Once the laundry is done, I’ll be ready to hit the road again. I’ll leave fairly early tomorrow, get supplies in Salina (Sal-EYE-na), and then check out the lake.

Warning, this post contains GROSS photos below the video. Proceed at your own risk!

I was not able to get video of the damage, but I do have pictures. Again, these are GROSS. 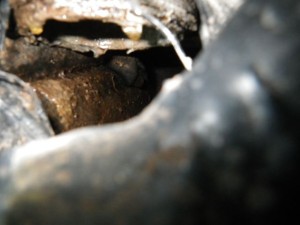 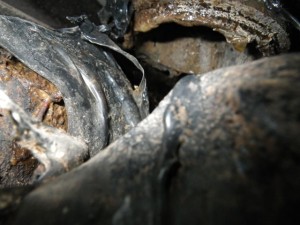 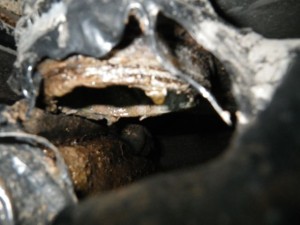 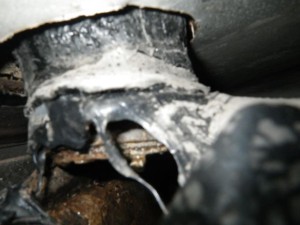 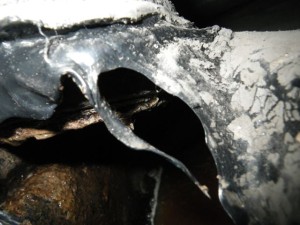 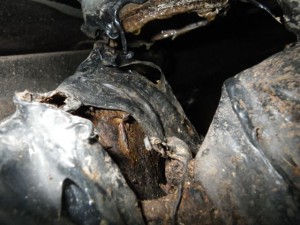 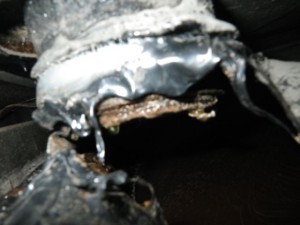 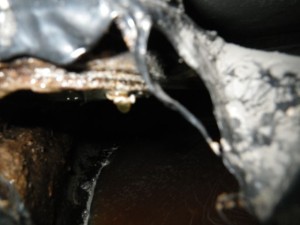 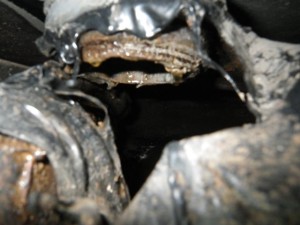 So as you can see, the pipe that goes straight down into the tank as well as the top of the tank are all melted away. The tank is not patchable or usable.

Now, even if I found an RV shop that had the right tank in stock (not likely; research tells me this is a order it and get it in a couple of weeks type of product as there are too many to keep a selection in stock), it’s one more expense that I am going to struggle to cover cover. And that’s the subject of my next post.

L is in the process of repairing the grey water line. Not a problem, that’s going well. There is a but coming.

All that time under the rig has enabled him to get his bearings and he was able to find proof that the blowout caused the exhaust pipe problem because there are skid marks on the bottom of the black water tank.

And not only that… the heat wicked up the top of the black water tank and there is a fist-sized hole in the very top of it.

I think I’ve earned the right to go cry now. I don’t think I even need an estimate on what it’s going to cost to pull and replace my black tank to warrant shedding a few (lots of) tears because we all know it’s going to be beaucoup bucks. 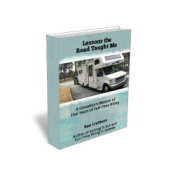 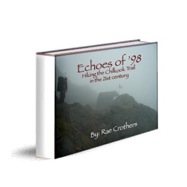 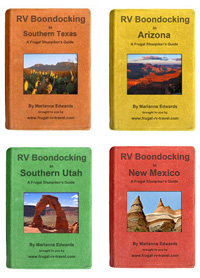