I’m back at the Minot Starbucks where I got online last time I was here before getting my cell phone connection to work. It’s been a long couple of days and today is not over!

Going back to Stettler for a bit, there was a lot to celebrate on Tuesday night, so Donna, Ken, and I treated ourselves to dinner at Stettler’s White Goose Restaurant. The food was excellent and reasonably priced! I enjoyed their chicken souvlaki and would go back to this restaurant without hesitation.

Wednesday morning, I dropped the truck off at CR Glass at 8AM. The other glass place in town looked at me like I was an alien on Tuesday when I asked about the possibly of having my windshield replaced that day or first thing Wednesday. CR Glass said on Tuesday that they didn’t have one in stock, but that they’d have it by 8AM Wednesday and I could be on the road by 1:30ish. They were true to their word and the cost was only $262 with the tax. Thanks, CR Glass!

Goodbyes are always hard, and especially so when you know you won’t be seeing dear friends for another year. I mean, what would be the odds that I’d have to come back again to Alberta before my expected return date?! So I made sure to have everything packed up so I could leave straight from CR Glass instead of going back to Donna and Ken’s.

Donna made sure I was loaded down with electronic rejects, including a little inverter to charge my laptop and iPad when I’m driving! Croft had mentioned such a device, but I misunderstood what he meant, thinking he was talking about a 12V charger. Thanks, Donna!

Google Maps said I was looking at 10+ hours to my property, putting my ETA at about midnight, which was too late when I factored in breaks. But my GPS put the ETA at 11:00, which meant about midnight with breaks. I decided to try for it and reevaluate as I approached Swift Current.

The drive was smooth and uneventful until I got to about 30KM shy of Brooks and I discovered that my gas gauge is not properly calibrated. I went from having a quarter tank of fuel to being in the red in a matter of a couple of kilometres! I was on fumes when I pulled into the first gas station I could find and put in a full tank and then some. Talk about stressful! But my nerves were soothed when I was told, “You got plenty of gas. How about a free hot drink?” So I came out of there with a nice coffee with hazelnut creamer.

It was coming on 6:30ish or so when I hit Medicine Hat, so I took a bit of a detour to a Safeway to pick up a semblance of a picnic for dinner and breakfast.

Next time I go to my property, I will stay on highway 1 to Swift Current and only turn to highway 13 from there. Highway 13 from Cadillac to Weyburn is beautiful, but the bit between the junction of 37 and Cadillac was pretty rough.

I was coming onto a quarter tank of fuel when I hit Cadillac (hilarious, I used to live in Pontiac, but I digress). No problem, there’s a Husky there. Except that I arrived at about 8:30 and it was closed, with the next gas station being more than 100KM away and just as likely to be closed. I just about had a heart attack! And then I noticed the note under the closed sign, that gas was still available after hours with a credit card. There was two pages worth of instructions, but I quickly ascertained that the process was just like getting fuel at AFD Petroleum in Dawson City. So I had no trouble getting my fuel.

It was just starting to get dark when I rolled into Assiniboia and there was still pink at the edges of the sky when I landed on my property at bang on 10PM! I was able to set up camp and was snug in bed by 10:30. I read till 11:00 and slept soundly till 5AM when I was awoken by the sun since my temporary window covering (garbage bag + duct tape) had come loose. That was still a good night for me and I dozed till 7AM, so I was quite well rested this morning.

It was pretty cold through the night and this morning, but my sleeping bag and blanket were sufficient even though I was just sleeping in a t-shirt and shorts. I even left the canopy door cracked open. My fleece was sufficient to ward off the morning chill. All in all, a very successful first night sleeping in Moya!

looking towards the rear of my property 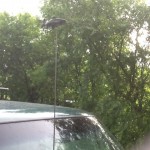 this whimsical addition to my radio antenna cracks me up!

looking towards the street (kind of annoyed the for sale sign is still there, but anyway)

I pulled out of my lot at about 7:30. I put Duluth, MN, into my GPS, knowing that I’m not getting there tonight, but it would at least plot me on the shortest route to Quebec. I thought I would be stopping in Weyburn for coffee and internet a couple of hours later, but Moya scrapped those plans. You see, a pick up truck, even a small one, makes light of gravel roads, so I was able to take the road to Willow Bunch that I swore I would never take again in my Accent. That put me at only about a half hour from the US port of entry at Scobey, MT. It meant hours of rural driving and no internet break till Minot, but also immediate access to cheap US fuel!

I stopped just before the border in a town with a small campground and visitor centre with public washrooms (rough but clean). I had breakfast, washed up, and threw out my trash then drove the 10KM to the border.

This was the first crossing where I was asked why I had chosen that port of entry, a very sensible question considering the remoteness of the crossing and how far I was from ‘home.’ I explained that I’d spent the night at my vacation property in ____ and earned a ‘That makes sense! Have a great trip to Montreal!’ in reply.

Fuel was running low as I pulled into Plentywood, MT, around 10:00 so I stopped for gas and coffee. They were having trouble with their POS system, so I was there a bit since they would not let me go to the bank right next door to get cash. That earned me another free coffee, and a really good one at that. 🙂

It poured rain most of the way to North Dakota, but has since cleared up a little.

I’m heading to a casino in Minnesota about five hours away. That will make a full day, but I can do it now that I’ve had a rest.

The truck drives like a dream. I am so happy with it. 🙂