Jody wanted to give me something special for my three-year RVing anniversary. But what do you give an RVer that won’t end up as clutter? The answer for this RVer is obvious: give her an experience. So Jody got together with Donna and planned an adventure for the three of us that would take us deep into the southern Alberta Badlands to a place where history is literally carved into the landscape: Writing-On-Stone Provincial Park.

This post is about Jody, Donna’s, and my adventure. Check out my Squidoo page about Writing-On-Stone Provincial Park for the scoop on the rock art and the history of the area, as well as many more photos!

So early Sunday morning (September 11th), Jody and I set off eastwards to Taber to pick up Donna, then we swung south to Milk River where we veered further east into the park. The weather was perfect and hot. It was about 11:30 when we arrived and we decided that lunch was the first priority. So we headed down into the campground area to tuck into the picnic Gary had packed for us.

There was still a couple of hours before our guided tour of the rock art, so we explored the hoodoos, which really put Drumheller to shame! The Blackfoot who traveled this land felt it was sacred and the place thrummed with its immense power. I am absolutely in love with the Alberta Badlands. Both Writing-On-Stone and Drumheller feature amazing landscapes, but Writing-On-Stone’s hoodoos really do give this more remote location an edge.

The only way to access the archaeological preserve that is the site of the rock art is to take a guided tour. It started from the still new visitors’ centre where you get onto a minibus that takes you to the start of the hike. The hike itself isn’t too difficult, but it does require sturdy closed-shoes because of the uneven terrain and cacti, and a wide-brimmed had and plenty of water (at least one litre) is needed on hot days. It was 45C (113) along the trail mid-afternoon Sunday!

Our guide, Bonnie, was a formidable woman whose love and respect for the area and the Blackfoot people shone through every word. She was a great storyteller and interpreter. Even though the hike only covers about three city blocks, it lasts about two hours.

After our unforgettable afternoon, we gals piled back into Jody’s van, returned to Taber to pick up Ken, and made it to Lethbridge where Gary had another delicious meal waiting for us.

I couldn’t have asked for a more perfect way to celebrate my three years on the road but to spend it with two of the dearest friends I have encountered along the way. Thanks, gals!

Donna getting into trouble at the Milk River info center

Donna leading the charge through the Milk River info centre

it was too hot for snakes that afternoon 🙁

a tiny part of the spread that Gary prepared for us

our transportation to guided hike trail

heading up to the sandstone cliffs housing the rock art 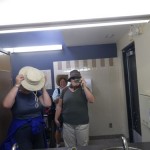