Driving northwest out of Saskatoon on the Yellowhead (16), the landscape begins to ripple and the vast golden expanses of wheat give way to green pastures interrupted by dense poplar copses. By the time you truly enter Alberta, after you’ve passed Lloydminster, you’d think you were back in northern Ontario. But the trees betray your true location, as Alberta along this route has more poplar than it does spruce.

My first night in Alberta was spent in a zoo of a shopping complex in Lloydminster. I was very technically set up in front of a Wal-mart, but, truly, home was squeezed in between a Kelsey’s restaurant and a bank. It was very noisy, crowded, and busy, but provided a good lesson in how far I’ve come in the past few weeks. My first times in such locations, I couldn’t relax and absolutely had to leave the coach. This night, I just got a few groceries to make dinner at home, and then I plopped down with a book for several hours.

I made it to Edmonton around 12:30 on Monday. It had been a miserable morning; rainy, damp, cold, muddy, and windy. Keeping Miranda in her lane had required all my energy. I wanted to go somewhere warm for the afternoon, somewhere I wouldn’t have to think too much, somewhere I could have some exercise.

So, within a half hour of arriving in Edmonton, I was on my way to the West Edmonton Mall.

I found the water park and was dismayed by the admission cost of 32$, plus 7$ for a locker rental. I just wanted to swim! I took a chance and asked the lady at admissions if there was perhaps a special fee just for the pool. Not during the week… because access to the whole facility is 17$ since not all the activities are open!

And that’s why I am really beginning to love this life, folks. I woke up Monday in a miserable parking lot, went to bed in a quiet setting surrounded by firs, and in the middle of all that, I spent three glorious hours swimming, body surfing waves, and taking too many exhilarating rides to count down waterslides. Monday was a Good Day.

Yesterday was okay. Everything I really wanted to see in Edmonton is either closed for renovations, closed for the season, or has a drastically reduced program. I did the Royal Alberta Museum in the morning and had mixed feelings about it. The 10$ admission fee felt bloated when I compared the museum to the RSM (2$) and I found the exhibits disjointed and badly organized. But I was able to fall in love with an absolutely adorable little guy (Australian stick bug) and learn about the shipwreck of the Empress of Ireland, which happened on the St. Lawrence River, and which I’d never heard about even though it was comparable in tragedy to the sinking of the Titanic.

I finished up my day early by going to Rutherford House, home of Alberta’s first premiere. 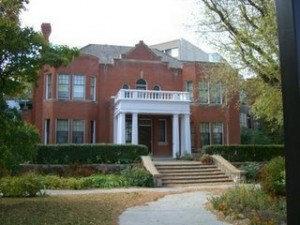 Admission was 4$ and got me a private guide who was fantastic. I enjoyed touring this Edwardian home, comparing it to Victorian homes I’d toured before. The Edwardian style is a lot more simple, but the paint colours are shockingly bright.

Today, I’m not sure if I’m doing anything touristy. I had wanted to go to Fort Edmonton Park, but it’s shut down for the season and the only thing going on during the week are wagon rides. Later today I’ll go check out if those are worth doing since the park is just minutes from here. I also need to visit an Elections Canada office to get a special ballot to vote by mail as we have an election coming up on October 14!

I’m very tired and the cold I woke up with last Thursday has hardly abated. So, I’m reconsidering my plans for the rest of the week. I was supposed to go to Calgary tomorrow and stay through to Sunday. I think I’m going to blow off the city and come back in the spring.

So, my new tentative itinerary is to make it as far as the Wal-mart in Red Deer tomorrow, the Wal-mart in Calgary on Friday, and then stop in Canmore for a full seven nights as I found a park there that offers a free seventh night for six paid up (making the average cost per night almost reasonable). From there, I could take a day trip into Calgary (1 hour) and day trips into Banff, similar to what I did in Regina. And then from Canmore, I’ll drive, up and down and through the mountains until I reach the Okanagan valley. It’s getting colder up here (there’s frost on the grass outside!) and the Okanagan Valley is starting to sound like the promised land. 🙂

I must also confess that I’m getting too settled into this semi-retired-type routine of mine and that it won’t hurt for me to start making some income again to remind me that there is still a big old world out there. 🙂