It was much too cold, damp, and windy to paint this morning so, with the realisation that it’s October 1st (!) it was suggested that it would be a good time for me to move out of the RV park so it can be shut down. I packed up quickly, went to dump, filled up the gas tank, and manoeuvred myself into position behind the restaurant, where they have a few spots with 30A and water. Even though the hookups are on the wrong side, my 30A cable and 10′ hose are sufficiently long enough. It’s not nearly as good a spot as being by myself down in the RV park, but there is one huge advantage: treated water. The water in the RV park is straight out of the ground. Even after filtering it, drinking this water is like drinking blood, it’s that iron rich. Moreover, I am irked by the rust spots in my plastic bathroom sink and toilet, so at least they won’t be getting any worse.

Last May, in my ignorance of all things telecommunications in the Yukon, I over-used the internet with just email, blog posting, and general surfing… to the tune of almost three hundred dollars!!! So, when I wasn’t able to get on to their network this time, I didn’t expect much sympathy and have been doing without the internet all week. The owners were very good about what happened in May, saying I should have been told that they  have such a low bandwidth amount. But I’d hate a repeat of that, so I’m posting from the library in town where it’s nice and safe. 🙂

I’ve been painting for a week solid. It’s very good for the ego to have people come up to me and say “Oh, you’re the painter!” 🙂 I’ve so far done three coats, plus primer, on a garage door, one side of a fence, and a dozen small flights of stairs. I need to do the other side of the fence, a second coat on both sides, a second coat on the stairs, and then at least two coats on a huge wall.

I was stopped yesterday and today by weather that has never been seen here by the owner: SNOW, and lots of it. It fell in big fat flakes all of yesterday and there is up to a foot in parts! I’ll need to do a few long days to make up for two days off and if the weather cooperates there is more than enough to keep me busy another two weeks here. I was glad for the forced rest because all the ladder climbing and squatting has been as hard on my knees as was the Chilkoot!

Being without the internet has made me discover just how long a day is! I’m not bored, far from it, but I’ve had time to watch Gone With the Wind AND reread the book! I’ve been cooking, baking, and doing other domestic chores, and I’m pretty sure I’m all caught up on my sleep. *makes a mental note to take an internet sabbatical more often*

The heater I bought in Whitehorse is fantastic. Between it and the larger unit, I have not had to turn on the propane yet and it’s cozy in the rig, not just tolerable.

I’m sure there’s more to say, but I only have 10 minutes left, so this will have to do. More next week. 🙂

My new friend Amber Goodwin, one of the daughters of the owners of Nugget City, took some pictures during my stay and sent them to me last night. Some of these were too fun not to share, even if they are a tad embarrassing. 🙂

First,here is one of my favourite pictures ever taken of Neelix (great shot, Amber!): 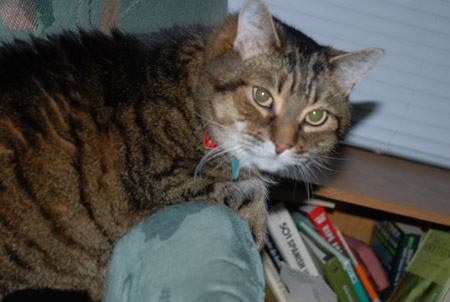 Now, here I am in my oh-so-fetching painting garb the day we raised the Nugget City flag:

Here I am ceremoniously holding the paintbrush I used for the first coat on the deck:

(this is the shell I bought for my Chilkoot trip!)

And, finally, too much fun:

Amber is starting out as a graphic designer; please check out her website www.ambergoodwin.com. She whipped up a nice cover for my ebook! Thanks, Amber!