Tuesday morning, I was expecting Joan who was driving down from Salem two hours away. She hadn’t confirmed her arrival time, but I didn’t think she’d arrive before noon. So, I got up around 8:30 and went to the Starbucks where the wifi was misbehaving badly. It wasn’t a lost morning, though, since they ran out of dark roast and I got an espresso for the same price. Love when that happens. 🙂

I finally decided that the universe was telling me to get my butt back home, which I did, and there was Joan at about 9:30! She hadn’t slept a wink because yesterday she closed on the sale of her RV! I have been ‘mid-wifing’ the process since I got here but haven’t written about this in any great detail, waiting for Joan’s ‘I bought a rig!’ post.

Joan had an adventure with the security detail while she was waiting for me and I am sharing this story with her permission. She walked up to security to let them know she’s my friend so they wouldn’t question her about being parked by Miranda. This conversation ensued:

Joan: I’m here to see my friend Rae, but her car’s not here!
Security: Then she’s not home!

Neither one of us had had any breakfast (I rarely eat at Starbucks; the food is crap and overpriced) so I suggested we head over to the Dune Diner at the corner of 101 and 126, a little cafe I’d noticed on my outings.

I had some of the worst coffee of my life there, but the pancake (singular; they are HUGE in the States!) was very delicious, as was the sausage. We lingered over our meal and eventually headed out. I was driving and pointed the car south since I’d been north on Monday.

The drive south from Florence is more inland, making me very glad that I went north on Monday. We got to Coos Bay, where there is a Walmart, and Joan had mentioned wanting to stop in a Walmart if we passed one, so that’s where we spent the rest of the morning. The sun was shining and I just knew that this utterly ridiculous start to the day was going to bookend an extraordinary adventure. I figured that looking at curtains and sheets with Joan was karmic payback for subjecting Donna to that in Omak in the fall! 🙂

My GPS has been acting up and took us south of Coos Bay from the Walmart, but the detour on Seven Devils Road was worth it. It was a scenic, twisty route with no businesses whatsoever that was a ton of fun in my zippy subcompact. It actually reminded me a lot of being on the back roads of Dawson City!

Joan had mentioned possibly doing a dune buggy ride, so we decided to pull into Sandland Adventures just south of Florence to find out if and when there were tours and then schedule lunch around the answer. There were two options; rides in the small dune buggies for $25 per person, or on the giant one for $12 a person. Neither one of us was too sure about doing the little one so we tentatively booked a seat on the bigger one, with the understanding that the tour would only be a go if two more people showed up. We decided that if no one else showed up, we’d take a chance and do the little buggy.

We had less than a half hour to kill, so we agreed to have an early supper (or linner, as I like to call it) and forget lunch. We both had enough of a snack to tide us over. We went down the highway a bit to a state park so that I could get an idea of what the dunes look like. I was amused to find people sitting in the sun on the beach of a lake. Kids were actually wading in the shallow water!

We went back to Sandlands and tons of people had showed up so the ride on the big dune buggy was a go. I’ve never been on a sand dune of any importance and ‘riding in a dune buggy’ has been on my bucket list, but doing the little kind really wasn’t important. As it turns out, I’m glad I started with the big one; it was plenty thrilling!

I can’t even describe what it felt like to ride out into that landscape, to emerge from deciduous forest into an arid playground. There were tons of people out on the dunes in ATVs and dune buggies enjoying the gorgeous weather and performing all manner of stunts.

The half hour ride felt like an eternity in the best way possible. Our guide gave us a fantastic ride, the highlights of which were when he took us down nearly 90 degree face cliffs! I can honestly say that the last time I had a rush like this was in the summer of 2002 when I went white water rafting for the first time and went over a 16 foot waterfall! Oh, this didn’t have the jolt of that, by far, but you still get that sick feeling in the pit of your stomach when you go over the edge, especially the first time when you don’t know what to expect.

Near the end of the tour, we stopped and had a chance to walk on the dunes for a bit. Joan got a picture of me and I have to laugh; I am SO not dressed for hiking around the dunes and look completely out of place!

This was a half hour that will be seared into my memory. It is the kind of half hour that reminds me why I have chosen to live this life. Thank you so, so, so much to Joan for initiating me to the Oregon dunes. I don’t think I would have thought to do the tour on my own. Doing it with a friend made it even more memorable.

It was coming on to five when the tour was done, so we headed back to the casino to have dinner at the buffet. It was steak and shrimp night. I don’t eat steak, but there were plenty of other offerings, like shrimp linguine, mustard salmon, and BBQ chicken so it was still worth my eating there. I really ate more than I should have, but I hadn’t had lunch! I gave my steak ticket to four guys sitting at the table next to me. I happened to cross paths with them later and they admitted that even split four ways, the extra steak was a bit much for them, but thank you!!!

Dinner came with $4 in free slot play. After Joan and I made our goodbyes, I decided to head up to play the slots. I actually enjoy playing slots and have played an average of $5 a night since I got here, not counting my $10 in free play. $5 to $10 a day is my limit on the penny slots; I can usually stretch that into a good half hour to forty-five minutes of fun. I don’t play slots every time I can (I’d have been broke doing that in Dawson!), but since I’ve been dry camping here I felt that $5 to $10 a day was more than fair for my spot.

ie. Do Not Mess With the Dunes

ride of a lifetime provided by Sand Dunes Frontier

Joan fiddling with her camera

climbing up to the dunes through the trees 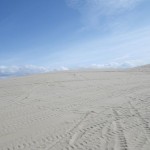 about to go over the edge

we went down that dark slope!

one small step for Rae…

first step in a lunar landscape

I look like I got dropped out of a spaceship! LOL

Share on Facebook
If you enjoyed this post, make sure you subscribe to my RSS feed!
Last Shots of Eugene (Valley River Center) and First Shots of Florence (Heceta Water District)* Wilsonville Camping World, Hood River, and John Day Dam