The budget’s really tight this month, so I chose this afternoon’s Seattle attraction very carefully. My first instinct was to head to the sci-fi museum, but that wouldn’t have given me any information on Seattle. Instead, I decided to look for a city tour.

Thanks to Trip Advisor, I was able to determine that riding the Duck would be the best way to experience Seattle in a short span of time. It sounded cheesy, but the price of $25 and the reviews convinced me to take a chance on this one and a half hour long amphibious tour.

We started off in downtown Seattle at the Space Needle, now beige, but once painted ‘galaxy red’ (orange!). Our guide pointed out a building that is apparently very famous (judging from the reaction of some people on the bus), but all I caught is that it’s an exterior set for a popular TV show. I’ve included a picture of it; perhaps one of my readers will recognize it and go OOH!

Seattle was the missing piece of the gold rush puzzle for me since it was there that the madness began. I learned that the old city of Seattle burned to the ground and was replaced by fire retardant brick buildings. Moreover, the city was raised about ten feet off of the tide flats, so there is an underground city below what we see today.

We meandered around, with the guide pointing out a few Starbucks and saying “Only four hundred and ___ Starbucks left to see!”, but quitting that before the joke got too old. We also passed Pike Place Market and a few other locations before splashing down into Union Lake… to the tune of the theme for Gilligan’s Island. The whole tour was like that, with a cheesy sound track that was appropriate to the situation (we got ‘On the Road Again’ when we came out of the lake!).

This fresh water lake links Puget Sound to another inland lake. It’s sheltered from the elements thanks to the hills around it, so there are many houseboats and floating homes on the lake. We saw one that was featured in the movie ‘Sleepless in Seattle’, which I have not seen. 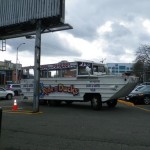 ladder into the Duck

this building got a lot of oohs; I think it’s featured on a popular TV show

this structure was a gas and coal factory

this is a ‘floating house’ not a ‘house boat’

driving over a drawbridge

a shout-out to a friend from Halifax–you’d love Seattle!

I really lucked out with the weather this afternoon; it had rained on and off all through my morning drive, but my afternoon in Seattle alternated between sunny and overcast, and it was warm. I would not want to do the Duck tour on a cold, windy day since the bus is open to the elements. I’d bring a coat even on a warm day for the bit on the lake.

Seattle’s a beautiful city; shame about how much rain it gets! I know I could never live in that climate, but I really got a sense for why people love it so much. It really reminds me of San Francisco, only with a more affordable cost of living. It has that west coast mentality that favours individualism, art, and using the outdoors as a gym.

The tour ended at 3 and I had some time left on the parking metre, so I decided to hoof it to Pike Place Market to get a feel for it. This 103 year old market only houses local producers and artisans. There are exterior stalls as well as a maze of buildings over several levels. It reminded me of Ottawa’s Byward Market on a grander scale.

I’d had a late breakfast and no lunch, so I kept my eye out for a place to grab some grub. I was sort of looking for sushi when I got a whiff of garlic that led me to a place called ‘Falafel King’! The lineup was long and filled with locals, which was a good sign. It was the first time I’ve ordered falafel and wasn’t offered any options, so the contents of my sandwich were a surprise. It turned out to be some of the best falafel balls I’ve ever eaten, with onions, parsley, tahinni, hummus, and cucumbers. This is the first time I’ve had Lebanese or Syrian-style falafel with cucumber and I think I prefer it to the more traditional tomato and turnip! Decently priced at $5, I was thrilled by this unexpected treat.

It was coming on to five when I got back to the car, so with a two hour drive ahead of me and a full day with lots of walking behind me, I decided to head on home to Blaine. I haven’t had my fill of Seattle yet, not by far, but at least now I can say I’ve done more than just pass through it.