Today was the best sort of day!

First off, the weather was just beautiful; crisp but not too cold, with a bright blue sky that contrasted sharply with the emerald and amber foliage of the park. It was the kind of day meant for strolling outdoors.

As it turned out, Fort Edmonton Park isn’t closed during the week in the fall! It just runs on a very reduced basis: most buildings are open, but there are few interpreters and no concessions are open. There are also wagon rides available that go through the park and give the history of it.

While I was disappointed that the first Rutherford home was not open today, the atmosphere in the park more than made up for that. It was quiet and empty, and it was an absolute luxury to tour at my own pace, unhurried and without having to push my way through crowds.

Normally, there is a train which takes guests from the admissions building to the Edmonton Fort, from which guests can amble back chronologically through the exhibits. I did my tour in reverse and I actually much preferred that, as it felt like I was slowly making my way back in time, from a 1920’s street, to one from 1905, to one from 1885, to the old fort circa 1840.

At the fort, I took the the wagon back to the entrance, then back to the fort again, from which I took a slightly less beaten path back so that I could snap pictures of the few buildings I’d missed which had been pointed out on the tour.

I wound up spending four hours at the park when I had expected to spend just one. Admission for today was just 8.75$!

The entrance to the park is supposed to be inspired by the shape of a boat and that of a fort wall.

I collect(ed?) blue willow dishware and snapped a picture of this enamel piece as I’d never seen one that was so pale. I came close to buying this dish in the gift shop but showed remarkable restraint. 🙂

The first mosque ever built in Canada (and possibly North America) looks Ukrainian; guess the nationality of the architect and builder. 🙂

Private toilet facilities at the fort have only three holes!

The round barn is an original building that was moved to the park. The design (a 20-sided polygon) wasn’t very popular, but made for an efficient use of space as it could hold more cattle per square foot and allowed for a common feed area in the centre that could be supplied by a hay loft on the second level. 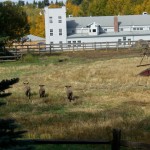