There are two ways to get from Campbell River to Nanaimo. The first is the way I came after the ferry, highway 19, a new thoroughfare deemed the ‘inland highway.’ It is a speedway, pure and simple, with the highest speed limit I’ve ever seen in Canada (110kph) and nothing to see except a blur of trees. The second option is the older ‘ocean route’, highway 19A, which meanders its way quietly through sleepy hamlets. This is the route I picked to go to Nanaimo today.

It rained all day and most businesses were shut tight, so there wasn’t really much exploring to do. I simply savoured the coastal drive, occasionally stopping for photographs or to stretch my legs.

My longest stop before Nanaimo was in Qualicum Beach, a picturesque retirement community with the oldest average population in Canada. ‘Qualicum’ is from the Pentlach language and means ‘chum salmon.’ I took a small detour into downtown so I could see some of the murals. The town has a museum, but it is only open on Tuesdays and Thursdays during the winter.

I’ve known about Nanaimo since I was a girl because my childhood best friend moved there when were were about ten. I looked him up before coming to the Island, but have thus far been unable to find him and imagine that he’s probably no longer in town. Nanaimo is also famous because of the delicious dessert named after it, the Nanaimo Bar, a decadent confection featuring chocolate, custard, and coconut.

The weather made wandering around the pedestrian-friendly downtown unappealing, so I decided to visit the Nanaimo Museum and take a quick glimpse at the harbour, then call it a day.

Coming into downtown Nanaimo was frustrating. There were two signs for the city and then signs for Victoria, more than a hundred kilometres away. I assumed that I missed downtown and got off the highway, then spent some time trying to find the museum before my GPS was able to help me. As it turns out, Nanaimo is a long, narrow city, and there were more than ten kilometres left to drive before hitting the downtown exit. Nanaimo definitely needs a ‘exit at *** for downtown’ sign at the city limits. Once downtown the museum is easy to find, just follow the big blue M signs. I was happy to find free parking at the corner of Museum Way and Terminal Avenue, literally in front of the museum entrance.

The Nanaimo Museum is brand new. The $2 entrance fee was easily explained by the museum’s size; tiny. This is a fine museum that makes full use of its small footprint. Within a few minutes of arrival I knew what Nanaimo was all about, from its coal mining origins to its bathtub races and Native heritage. It was one of the best museums I have ever visited.

During the summer, the museum also operates the Nanaimo Bastion, a fort built by the Hudson’s Bay Company between 1853 and 1855 to defend its coal mining operations. I had a chance to view the exterior of the Bastion after taking a quick tour of the harbour, which was cut short by the start of a downpour that did not let up until I got home. The harbour was just a couple of blocks from the museum and my raincoat was soaked through by the time I made it back to the car!

Nanaimo has a reputation for being a working, charmless, city, but I found downtown to be quite beautiful and I would very much like to spend more time exploring it on a slightly drier day. Being just 150km from Campbell River, it is the perfect destination for a day trip; far enough away to shake off cabin fever, but still near enough to be easily doable as a round trip.

the first rest area outside of Campbell River

details about the mural

bathtub racing, what an idea!

the first black teacher in BC

Nanaimo’s mines are notorious for their death and injury rates, hence the ironic messages.

this trunk belonged to Joseph McKay, founder of Nanaimo

these beautiful combs caught my eye 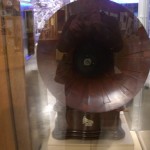 what a great staircase!

I don’t know if I will ever be able to see a palm tree in the wild and not feel a tingle. 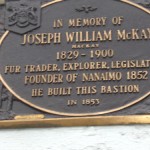