Tuesday, Charles and I started work on roofing the cabin. SaskPower had promised to come move the neighbour’s power line out of the way Thursday and Friday so we wanted a head start and we did what we could away from the line, which was a lot more than expected. We got about 95% of the shingles off and about 80% of the strapping on.

Wednesday, I went to town for more lumber and hardware while Charles built a door for the shed. It then rained like the dickens all day. Everything inside the cabin is soaked in mud. 🙁

SaskPower came by late in the day to lift the wire using a telescoping insulated pole. The forecast for Thursday wasn’t great and the tech was worried we wouldn’t have enough time to do the roofing, so this gave us the weekend since he could leave the pole there till Monday. I would have preferred to have the wire completely out of the way, but this was a satisfactory solution. I continue to be impressed by the level of service I get from SaskPower.

Today, Thursday, Charles was at Haven bright and early. It was a very cold and windy start to the day, but we were able to finish strapping by late morning. We then got to work hanging the shed door.

I’d like to point out that I actually do work on the roof! I was right up there with Charles at the peak pounding in nails and I must have been up and down at least twenty times to fetch things. I also do all the measuring and cutting of the lumber using his chop saw.

We broke for lunch and then T came over to help us with installing the tin. We were able to put on a full eight sheets before Charles called it quits. He had the hardest position, right on the roof balancing on the pieces of strapping, so his legs were getting shaky.

Today was the first time I actually screwed in any tin. The way the chores have been divvied up, I never got a chance to try it. The tin comes with matching screws that you pay an arm and a leg for and which have a washer. The way to get them screwed in with the tools available to us is to first pound them into the tin with a hammer, just to get them started, and then we use a drill with a socket bit on them. It goes very quickly!

T won’t be available till after lunch tomorrow, so Charles will come over a little later in the morning to finish work on the shed door (adding interior stops). We should be able to finish putting on the tin tomorrow, but I expect that the ridge cap will eat up part of Saturday.

Strapping the cabin. We use the straps (1x4s) as toe holds.

Charles made this door for the shed out of my last sheet of OSB (chip board) and some scrap 2x4s, as well as new hinges and a new gate latch. 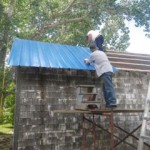 You ideally need three people to put on the tin. I was on the ground passing up sheets, T was on the scaffolding grabbing the tin and putting it in place at the bottom, and Charles was at the peak.

Charles: “I’m Santa sitting on the roof waiting for my reindeer.”

Inside of the shed door. It’s HEAVY.

Two thirds of the east side of the cabin is roof.

And two thirds of the west side is also done!